Nazarbayev: Toughening of sanctions exchange is a road to nowhere

Nursultan Nazarbayev urged not to cease the search for peaceful solutions to overcome the disagreements that exist in the world today. According to him, the confrontation in Ukraine and the destabilization of the situation in the Middle East is the consequence of the global crisis. In his statement the President mentioned also the sanction confrontation between Russia and the West, reports a correspondent of Tengrinews.kz from Akorda. 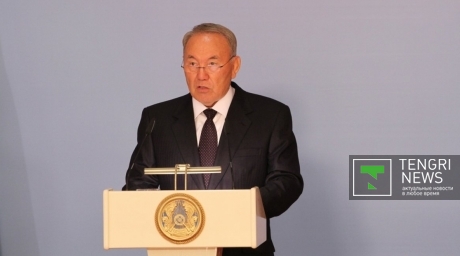 “In this difficult time, it is important to avoid further escalation of conflicts. Toughening of sanctions exchange is a road to nowhere. Negotiations and finding of common ground on all the most complex questions is the only alternative. Kazakhstan is committed to this alternative and tries to influence as far as possible. The most important thing is not to cease the search for peaceful solutions to overcome the disagreements” – said the Head of State after the heads of foreign diplomatic missions had handed him credentials.

The President noted that today Kazakhstan is creating favorable conditions for the participation of foreign companies in the industrial program. In particular, foreign investors from 10 countries had been announced to travel visa-free and the list would expand, Nazarbayev said.

“National measures, stability of our laws, political stability in the country, the GDP growth of 6 per cent, and international reserves that exceed 100 billion dollars create a basis for a steady work. As you can see, for the same reason we create a compact government to improve the effective management in a business environment. Kazakhstan offers unique conditions for foreign investors in participating in industrialization. These are low taxes, benefits, and stability” – said the Head of State.

Get E-invitation Book a stand